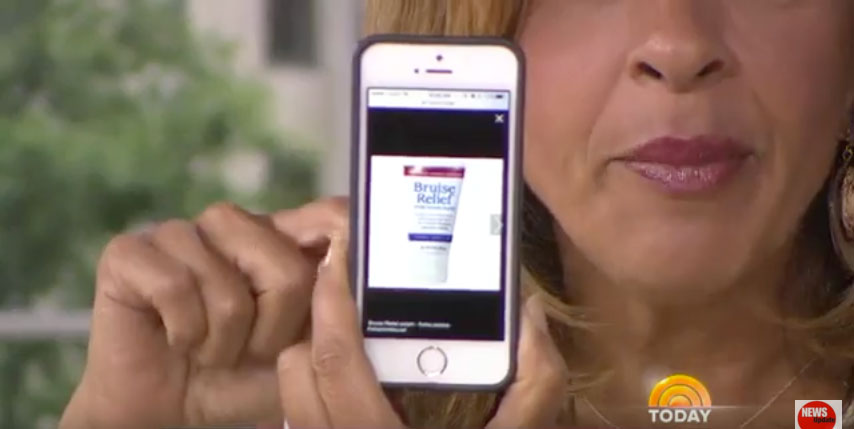 Bruise Creme (formerly known as Bruise Relief) was featured on the Today Show with Hoda & Kathy Lee on Wednesday June 22, 2016. Kathy Lee tries different viewer-suggested home remedies to cure a bruise on her arm that she had acquired over the weekend. Scroll to 1:40 in the video to hear what Hoda’s friend Meg Farris, noted medical journalist, has to say about Bruise Creme.

Hoda: Let me tell you something else, a friend of mine […] said that she has the total remedy right here. She says it’s called, here’s picture of it, it’s called Bruise Relief. My friend Meg Farris said this is what works. She said doctors use it, she does a lot of medical reporting, doctors use it after they give an injection to somebody so that it doesn’t bruise. They use bruise relief; it was created in Louisiana and they smudge it on and then poof it goes away!

Kathy Lee: I take a little teeny baby aspirin every day so that [helps].

In the beginning of the segment, Kathy Lee applies arnica gel to the bruise. She also stated that she takes aspirin every day, which can have adverse reactions with the simultaneous application of arnica gel. WebMD states that any medications that slow blood clotting can actually increase your chances of bruising and bleeding, since arnica also thins the blood. Always talk to your doctor or pharmacist before taking medications to ensure they don’t have any adverse interactions.

Bruise Creme does not contain arnica, which makes it the safer option to help vanish bruises. Click here to learn more about Bruise Creme!